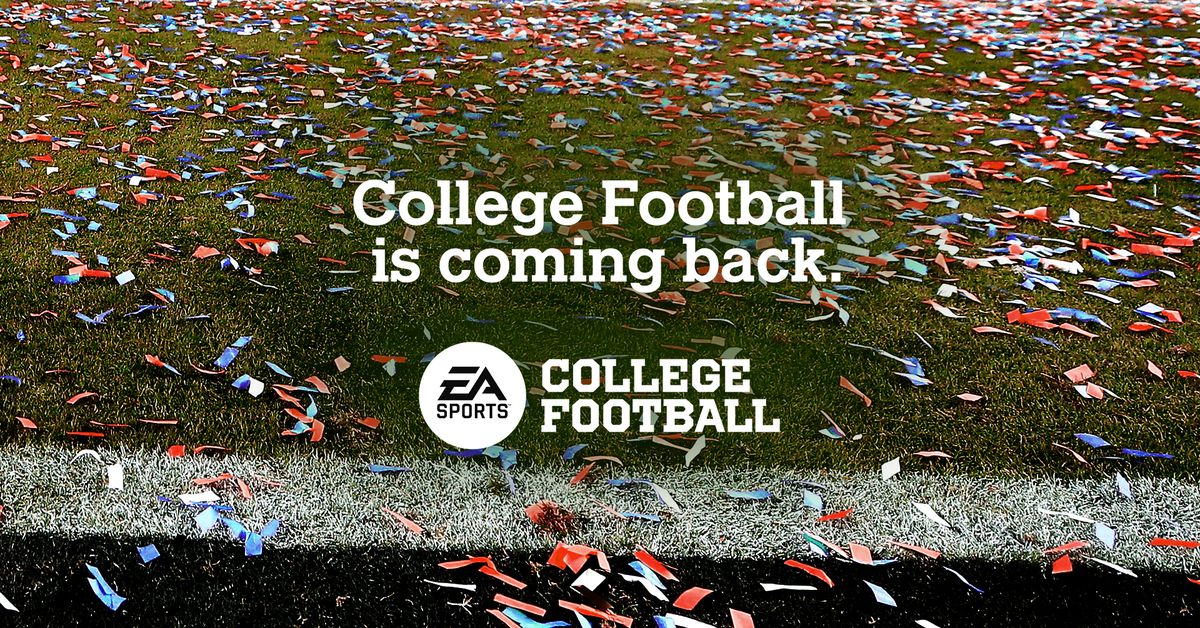 Electronic Arts on Tuesday announced that development is underway on a new franchise titled EA Sports College Football. While the publisher did not offer a launch date or release window, and said in a news release that it was announcing “the expected return” of its college series, the company did say the game would have “more than 100 institutions, featuring the logos, stadiums, uniforms, gameday traditions and more that fans have come to know and love.”

Importantly, though, it will not have the real names or likenesses of current college football players. The unauthorized use of players’ likenesses is what led to the cancellation in 2013 of EA’s original NCAA Football series, when EA Sports, the CLC, and the NCAA settled a class-action claim brought by former players for $60 million.

The last entry in EA’s previous college football franchise was NCAA Football 14, which was released in July 2013. In the intervening years, individual schools have cameoed in the career modes of EA Sports’ Madden NFL and 2K Sports’ NBA 2K series, but not the full 128 members of the NCAA’s top football classification (there are more in college basketball).

The NCAA itself has discussed changing existing rules that prohibit college football and basketball players from being compensated for the use of their names, images, and likenesses while playing for their school.

EA said that it and CLC are “continuing to watch those developments closely.”

“We love the energy, tradition and pageantry of college football and I am beyond thrilled to say we are back in development,” Weber said in a statement. “We have a lot of really exciting work ahead of us, and a great team that is eager to bring a new game to players in the next couple of years.”

EA Tiburon, located in Maitland, Florida, developed the NCAA Football series; when that franchise was canceled, many of its developers shifted over to Madden NFL, which is also made at Tiburon. Tuesday’s announcement did not mention which studio would be handling EA Sports College Football, but given the assets that both series shared, it’s assumed that Tiburon is back on the job.

In an interview with ESPN, EA Sports vice president and general manager Daryl Holt said the new college football video game is very early in its development; ESPN reports that “it won’t happen this year.”

In the same story, ESPN noted that the NCAA does not have to change any rules or policies for this game to go forward at the moment — if it goes forward without real players.

In 2013, multiple big-time schools and major conferences were backing out of their licensing agreements with EA Sports, mostly because of the bad PR and optics of the players’ lawsuit. The licensing agreements themselves actually paid little — in some cases, just $77,000 a year to a top-10 program.

NBA 2K has had about a dozen real-life colleges appearing in its career mode since 2015; in 2017, Madden NFL 18 brought back a few colleges for the series’ first narrative mode, Longshot. Madden NFL now features 10 schools in the player character’s onboarding portion of the career suite.

Holt told ESPN that EA Sports saw strong positive feedback to these colleges’ appearances, particularly in the territories where they have a lot of fans. “We know [fans] are itching for it and we know we can develop and deliver a great college football experience,” Holt told ESPN, explaining EA Sports’ thinking. “So why are we waiting?”

When EA announced its portion (and CLC’s) of the lawsuit’s settlement back in 2013, there still were plans for the series to go forward under the new name of EA Sports College Football, without the NCAA’s branding. But as more schools and power conferences defected, the publisher realized that an integral reason for the game’s appeal — all of the schools, bowl games, awards, conferences, and real-life trappings, not just the players — was severely diminished.

EA still held out hope that it could get back into college sports. Chief executive Andrew Wilson told a conference in 2019 that the company still had its mind on college football. Wilson at the time was responding to the passage of a California law that prohibited the NCAA from enforcing some of its amateurism restrictions on athletes at the state’s public universities.

On Jan. 11, the NCAA announced that it would delay its members’ vote on a proposal to let college athletes “benefit from their name, image, and likeness.” This would allow, for example, football players to be paid for endorsements, autographs, and appearances at private camps and clinics — and, theoretically, for appearances in video games.

The NCAA tabled the proposal because of “judicial, political, and enforcement issues and a subsequent recommendation from NCAA President Mark Emmert,” the organization said in a statement.

Polygon has reached out to Electronic Arts representatives for more details.