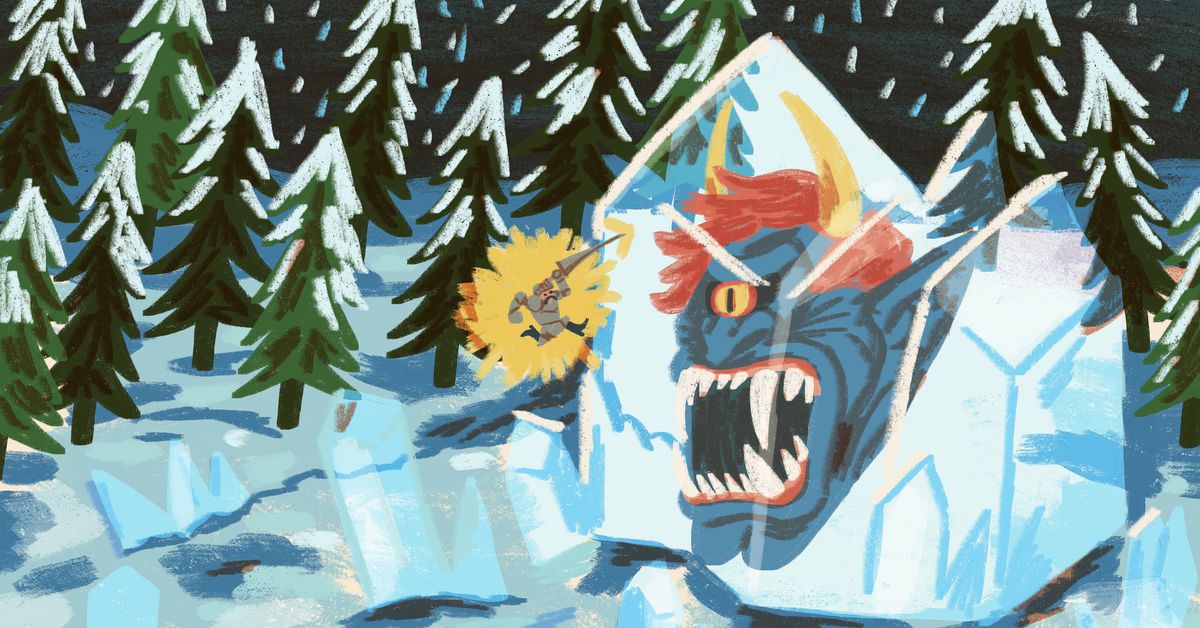 Take our mittened hand and let Polygon’s Winter Games package for 2021 guide you through the playground of wintertime games — what’s great, what’s not, and what exciting features await you in the games coming out in February and March.

When the description “most difficult video game” comes to mind, many jump to titles like Dark Souls and Cuphead. Before those came Ghosts ’n Goblins, a game from the brilliant mind of Tokura Fujiwara that defines the word “difficult” and lives on as an enjoyable nightmare in the dreams of ’80s kids everywhere. Fujiwara directed many early Capcom titles, such as Sweet Home, the horror classic that inspired the Resident Evil series, as well as the legendary platformer Bionic Commando. But Ghosts ’n Goblins is still recognized as his baby and his first true breakout title.

It’s now been over two decades since the release of the last true mainline Ghosts ’n Goblins title, and years since Fujiwara directed his most recent game, Mad World. Now Fujiwara and Ghosts ‘n Goblins are reunited again for a promising new entry in the series, Ghosts ’n Goblins Resurrection — which he spoke on, among other things, in this interview with Polygon.

Polygon: How does it feel coming back to Ghosts ’n Goblins after all these years?

Tokura Fujiwara: It’s been 35 years since the original Ghosts ’n Goblins released, and I’m very grateful that fans continue to cherish this series. It makes me incredibly happy to deliver a brand-new title following the series’ 35th anniversary.

How has the world of gaming changed in your eyes since you worked on the first Ghosts ’n Goblins back in 1983?

Over the years, many new game genres have been born. The world of gaming has become so diverse that there’s game content that seems to cater to each person’s enjoyment. I imagine you feel the same way, but I think games continue to be loved because what players enjoy totally varies from person to person. There are so many game creators crafting experiences that accommodate those needs and interests with various genres and means of expression. There are titles that are appealing because they change and evolve, but on the reverse side, there are also titles that are attractive because they stay the same. The fact that there are a variety of players with different tastes makes me very happy and gives me a sense of purpose in my work.

Have any recent video games influenced any elements of the classic Ghosts ’n Goblins formula for you while developing this new title?

I wanted this game to focus on what I believe are the series’ hallmarks, so didn’t particularly take any inspiration from other titles. From the beginning, the stages were inspired by a “horror theme park”-like concept and filled with obstacles that provide players with the sense of accomplishment one feels when they conquer a difficult challenge through their own efforts. These two extremely important elements were top of mind in my approach to Ghosts ’n Goblins Resurrection.

I’ve heard that you’re a big fan of creating a true challenge for players, and game difficulty is a very hot topic these days. What do you feel counts as real difficulty in video games versus cheap obstacles?

Players feel that sense of accomplishment when they are able to overcome challenges in a difficult game through their own creativity and efforts. I believe players get frustrated and feel the game is being cheap when there are too many accidental or haphazard elements that become the challenge and affect the player’s progression, rather than allowing players to use their own creativity and effort.

Considering the player base at the time, I probably wouldn’t have created multiple difficulty levels for the arcade or console version of Ghosts ’n Goblins. When Ghosts ’n Goblins launched, there wasn’t a significant difference in the level of proficiency between players, so they were able to compete against each other on a similar playing field.

A lot of fans have had very polarizing reactions to the new art style of Resurrection, in comparison to the usual style of Ghosts ’n Goblins. What are your thoughts on the new look?

Seeing many different reactions and opinions on the art style after the announcement made me realize how much love and fond memories players have for the series, and knowing this brings me a lot of joy. I believe the original Ghosts ’n Goblins had a great, enjoyable art style. For Ghosts ’n Goblins Resurrection, we really wanted to utilize concepts like an “animated scroll” or a “picture book” motif that we felt would be at home with the series’ “horror theme park” inspiration. I think as people play it, they will agree it meshes well with the series.

Did you have any nerves about coming back to “resurrect” the series? What did you think would be the most challenging thing about remaking this game?

I was extremely happy to get this opportunity and return to the Ghosts ’n Goblins series. Since this title is a reboot of both Ghosts ’n Goblins and Ghouls ’n Ghosts, it required me to go back a lot of years, but the memories from those times came back to me quickly.

Regardless of the title, game development is a massive undertaking. I was very excited that I was able to express this title in such a large scale compared to the limitations we had with the original Ghosts ’n Goblins. However, I was also simultaneously aware of the challenges involved.

Now that Ghosts ’n Goblins is back, are there any other games you’d like to revive? (Maybe Gargoyle’s Quest?)

The team came together and worked very hard to create Ghosts ’n Goblins Resurrection, so my attention is still on making it the best experience possible. I can’t say much else at the moment, but I hope you are looking forward to the game.

Where did the idea for Arthur’s famous heart-patterned underwear come from?

There’s one very important detail I need to share with you that people might not know: the pattern on his underwear is actually strawberries.

Arthur has this air of ruggedness when he has his armor on, but on the inside, he gets a little fancy and wears his favorite boxers.

However, his underwear isn’t simply just something that he likes to wear. It was actually a gift from the princess and acts as a “charm” to protect Arthur in battle.

It’s probably safe to say the strawberry design was something the princess was fond of.

Most downloaded Nintendo Switch games for February 2021 – My Nintendo News

Quickchat feature added in Among Us, devs promise big update is still in the works – My Nintendo News

Most downloaded Nintendo Switch games for February 2021 – My Nintendo...

Most downloaded Nintendo Switch games for February 2021 – My Nintendo...